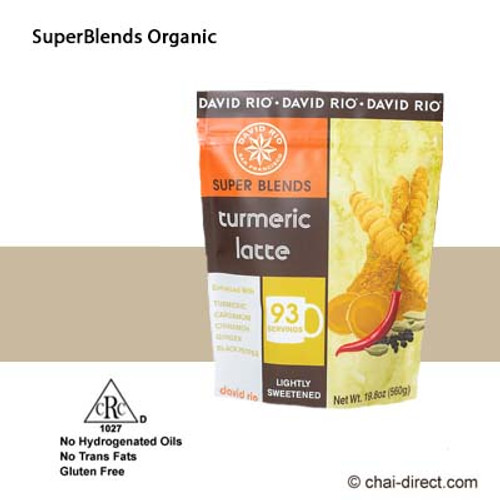 "Seriously? Tumeric Latte? Sure, I like Indian food; I like curry. Tumeric in proportion, fine. But not as a standout spice to feature, up and above all others! Have they lost their minds??? Despite my own opinion that this titling is a marketing blunder, I was found the drink pleasantly surprising. It's a muted quality of tumeric that doesn't overpower. And the sweetness, like with all David Rio's Super Blends, is also on the subtle side. Personally, as a chai fan, I like their suggestion to mix it with Tiger Spice. Or, if you fancy yourself more of a purist, try mixing it with the Masala SuperBlend. That combo will really knock you back. All in all, Tumeric is quite a nice addition to the product line, despite my initial prejudice to the contrary. The moral of the story: You know what they say about 'contempt prior to investigation;' don't knock it 'till you've tried it! if you are on the hunt for a new angle in your chai quest, this just might be the addition you are searching for."